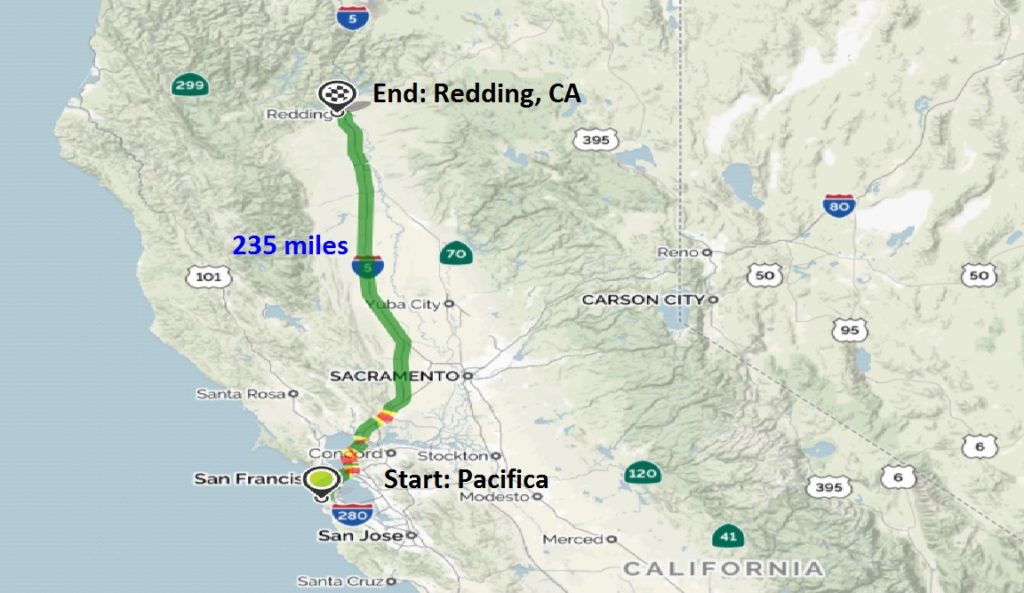 Saturday, August 12, 2017. Well, after a few days of resupplying and some rest, we are back on the road. We decided that we were not going to take the dogs with us, but rather put them up in Dog Time! in San Leandro, CA. Initially, we were skeptical, as they had low prices and said that the dogs get to be socialized all day. In fact, before we could even make reservations, they had to evaluate our dogs, and the dogs had to stay for one night to see how it was. The staff were happy with the dogs (especially after our little dog seemed a bit to defensive at first). They gave us an internet site that we could watch them literally in the play room all day. Hopefully, the dogs will want to come home after getting to spend so much time playing with other dogs. One of the things we now have to consider with driving our Rig is finding a gas station that we can get in and out of without damaging our levelers. We have an automatic set of 4 levelers that at a push of a button, it comes down like landing gears on an airplane, and levels our RV. It is a lot better than the old system of cranking it by hand, using a bunch of bricks or blocks, then using a hand-held leveler to make sure your RV is level. It also helps to make sure that your Fridge is working properly (it could actually damage your fridge if your RV is not balanced; something about the chemicals and refrigerant). Anyways, when we retract the levelers, they only go up so much. Thus, if you are coming out of a steep driveway, you could end up really damaging the levelers. Anyways, on our way northbound on Interstate 80 just north of Hwy 4 is a 76 gas station off of Willow. It is great to get into and to leave with easy access back onto I-80 north. We arrived at Mountain Gate RV Park on the northside of Redding, CA at around 5pm and it was 99 degrees and still 94 at 7:30p. Pacifica was barely 60 degrees this today. Bathrooms are nice (though no locked shower stalls). It is one of the few RV parks thus far that allows Colson to be in the hot tub, which he really enjoyed. Internet is also really good, which is kind of rare for a RV park, but they limit you to 2 devices, which was fine with us.

Like Santee Lake in San Diego, the brochure for this place had a Pizza joint that would deliver right to our site. In fact, Pizza Factory even delivers fountain sodas (the one in San Diego only had bottled soda).